The poet George Gorner is the author of the lyrics for Reb Shlomo’s first original English song, “Lord Get Me High”. He passed away on May 25, 2013. When Reb Shlomo performed George’s wedding on March 24, 1969 in Golden Gate Park, he turned to the groom and asked him to write English lyrics for Shlomo’s tune יָשִׂישׂ עָלַיִךְ אֱלֹהָיִךְ כִּמְשׂוֹשׂ חָתָן עַל כַּלָּה.

I had the privilege of interviewing George on Nov. 30, 2012. He was a colorful figure with a tragic story. His father was a Holocaust survivor whose entire family was slaughtered at Babi Yar. He became an avowed atheist and his Jewishness was something to hide so as to avoid persecution – “There was nothing Jewish in our house”. George reminisced with me describing how it was Reb Shlomo who awakened him to a meaningful Jewishness.
George Gorner was born in the middle of World War II, on December 28, 1943. He died at age 70 in Stinson Beach, California. George first met Shlomo in February 1967 when Shlomo was performing at the I/Thou Coffeehouse on Haight Street. This was one of the first venues for Shlomo's Haight-Ashbury concerts. At the time, George had just begun graduate study in literature (poetry) at San Francisco State University. An accomplished lyricist, George was somewhat of a media celebrity because of his role in leading anti-war songs. San Francisco State was a hotbed of campus protests during 1966–1968. Gorner explained recently: I was facing a lot of charges and had warrants out because I would take the microphone and sing protest songs during the demonstrations. In the end, I pled guilty to disturbing the peace. (Gorner, personal discussion, Nov. 30, 2012).
Years later, when Shlomo humorously retold his version of how George composed the lyrics to “Lord Get Me High”, he added that George "was arrested for singing an obscene song and it turned out to be my Esa Einai.” Gorner added lyrics to the song to condemn police brutality against peace demonstrators. His use of the f* word led to his prosecution for violating an 1872 San Francisco ordinance prohibiting obscene words in the presence of women or children. Here are the lyrics that George invented, apparently using Esa Einai as the tune. It is my impression that George’s vehement opposition to the war was fueled by his post Holocaust anger:

We saw you, in Chicago. We saw you attacking angels of peace.
You beat them and gassed them, with deadly poison.
They are beating children beyond belief.
This time we must stop them. stop them.
They had brought the gas. Stop the f* fascists before they prevail.

See my book on Reb Shlomo, pp. 160-161: Lord Get Me High,” Shlomo’s first original song in English, implied an alternative to the psychedelic high:

This song was based on a tune that Shlomo sang to the words of “Yasis Alayich Elohaiyich” when he performed the wedding of George Gorner, an avid song composer. Shlomo turned to the groom and asked that he prepare lyrics in English. A week or so later Gorner succeeded. Recently, George reconstructed more of the history of this song:

We left a concert at Sonoma State University near Santa Rosa. Pam, my new bride, was driving my old Corvair that had had a fire, so there was no backseat, just a lot of cushions. The sun was coming up in an unbelievable sunrise. Out the window was some garish hotel with flamingos. Shlomo and I were huddled half asleep on the cushions. Shlomo looked up and said, “George, the Lord is quite an artist.” That is when we began singing our new uplifting song “Lord Get Me High,” and we continued all the way back to his motel in San Francisco. 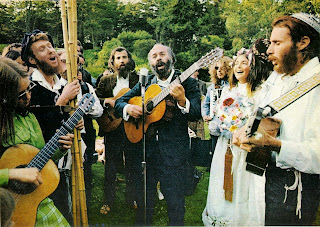 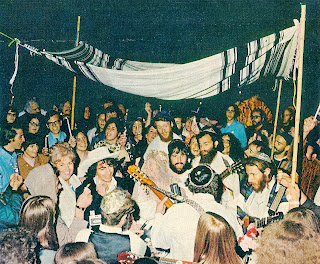 On March 24, 1969, Reb Shlomo performed the marriage of George Gorner to Pamela (Pam) Klein in Golden Gate Park near the HLP. Life Magazine was doing a feature story on weddings and they sent a camera crew to photograph the outdoor event. This was the first time that a major national media had picked up on Reb Shlomo’s innovative House of Love and Prayer activities. The two full color photos provided a glimpse into a new wedding style that Reb Shlomo had designed. See The Free-form Wedding Game,” Life Magazine 67, no. 13, Sept. 26, 1969, 95–96. Available on line at Google Books - http://bit.ly/1avTuUo